Certain offenders are seen by judges as likely to continue to present a considerable risk to society even after they have completed their sentence.  To manage that risk, a judge can designate these individuals as long term offenders and impose a long term supervision order (LTSO).  This order requires that offenders serve an additional period of community supervision of up to ten years at the end of their sentence.

This additional period of supervision allows for offenders to receive continued structure, observation, and support.  This period may, for example, include a requirement that an offender reside in a halfway house or meet with his or her parole officer more frequently.  Though this additional structure contributes to public safety, it requires additional resources, both human and financial.

As such, it is important to anticipate changes in the number of offenders with LTSOs under community supervision.  Doing so allows for appropriate planning of resource allocation and facilitates strong planning for supervision.

Using monthly counts from November 2004 to August 2011, the numbers of offenders with LTSOs in the community were projected for the next 18 months.

A number of projections were computed and statistically compared; the one which best fit the historical data was retained.

Projected Number of Offenders with LTSOs in the Community 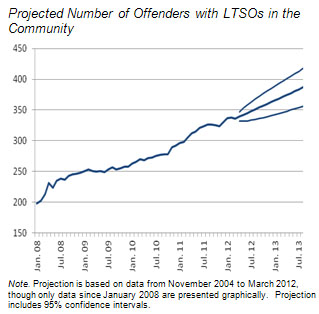 The projection incorporates solely historical data and does not consider the effects of changes in legislation or in judicial risk tolerance.  If such changes increase the number of offenders receiving LTSOs, the projection may represent an underestimate. On the other hand, the rate of increase will likely slow as greater numbers of offenders begin to reach the end of their LTSOs.

For these reasons, this projection should be updated periodically.

Those involved in community corrections should continue to expect growing numbers of offenders with LTSOs.